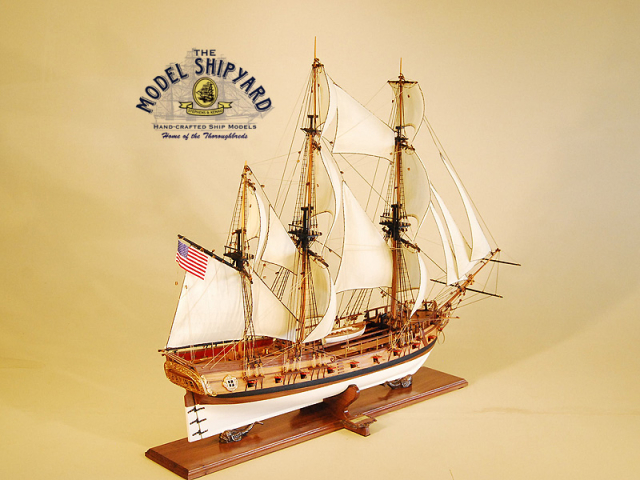 This model ship of the USS Rattlesnake was custom built from the following information:

About the construction of the USS Rattlesnake Wooden Scale Model Ship

History of the USS Rattlesnake

The Revolutionary War privateer USS Rattlesnake was designed in 1779-80 by John Peck, a Boston naval architect. The original Rattlesnake was built in Plymouth, Massachusetts, and in style resembled a miniature frigate, which had a separate quarterdeck and forecastle. These features are rather unusual for a privateer. She carried up to 20 guns (probably six and nine pounders) and had a usual complement of 85 men.
The original USS Rattlesnake was commissioned by the Continental Congress of the fledgling United States and helped to win the Revolutionary War by bringing in captured British ships. Privateer action in the North Florida area was intense as Georgia was held by the American Patriots and Florida was held by the British. Little is known of her career except that it was brief.
Late in 1781, she was captured by the British frigate Assurance (44 guns) and taken into the Royal Navy as the Commorant (14 guns). Sometime around 1784, it was renamed Rattlesnake after the British discovered they already had a ship named Commorant and soon afterward was sold out of the British Navy. Little is known as to her disposition from here except that she may have ended up as the French ship Le Tonnant as her lines were exactly the same as Rattlesnakes’.
The vessel was unusually fast, and her hull lines were recorded by the British Admiralty after her capture and have come down to us today. There is a replica of the Rattlesnake located in Jacksonville, Florida which is owned by the Maritime Heritage Foundation and is presently being completely restored.