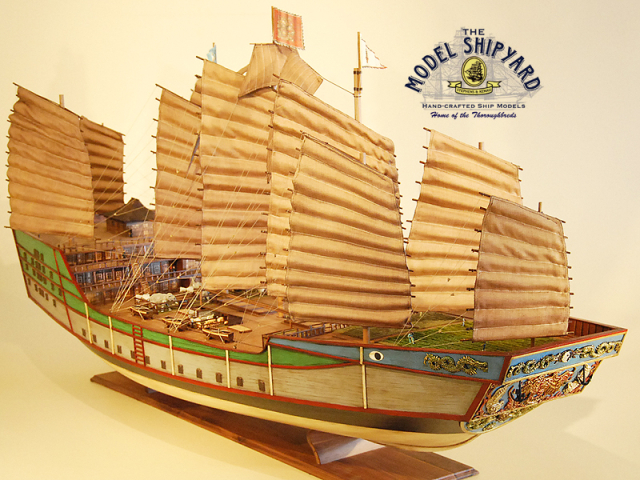 The Zheng He was a Chinese Treasure Ship in the fleet of Admiral Zheng He.

About the Zheng He Treasure Ship wooden scale Model Ship

This model ship of the Zheng He Treasure Ship was custom built from the following information:

History of the Zheng He Treasure Ship

The Chinese Treasure Ship was a large wooden ship in the fleet of Admiral Zheng He, during the early 15th century Ming Dynasty. He led 7 voyages.   There seems to be disagreement among scholars about the factual accuracy and correct interpretation of accounts of the treasure ship. Treasure ships were considered luxury ships rather than warships.

On the return of Zheng He’s last voyage, he found a new Emperor whose court was uninterested and even hostile toward the continuation of his naval adventures. Zheng He’s ships were decommissioned and sat in the harbor until they rotted away. Some scholars suggest that the Emperor ordered the treasure ships and records to be burned, although exact information on their fate is unknown.

A replica of Zheng He’s treasure ship was built in Nanking and was to be ready for sailing in 2013.

Learn more about the Zheng He Treasure Ship: https://en.wikipedia.org/wiki/Zheng_He