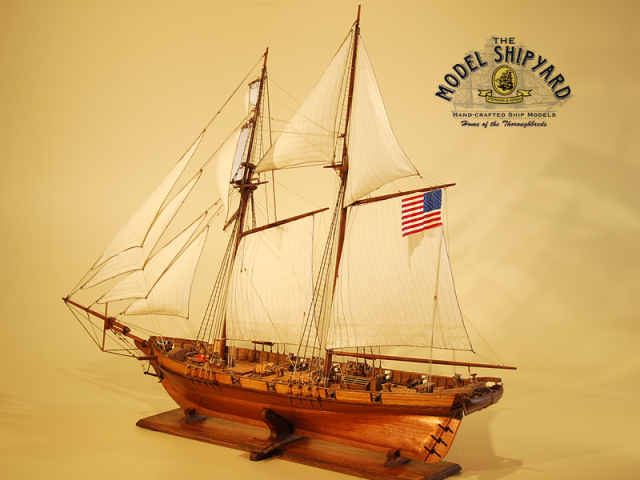 The Harvey was a Baltimore Clipper

This model ship of the Harvey was custom built from the following information:

About the construction of the Harvey wooden scale Model Ship

History of the Harvey

The Harvey was a clipper of the early age and was built with only 2 masts. The main American clippers were built by William Webb at Baltimore and by Donald McKay at Boston. The Harvey was launched 1847.

They were called clippers because of the high speeds they could develop in favorable weather conditions. The Clippers were used as blockade-runners during the American war of Independence.   They were later used in the opium and slave trade, but the USA Government countered this move by arming their own clippers.

It had been discovered that California had a great deal of natural wealth, and as a result, many people from the East Coast emigrated thereby using the fast clippers as a mode of transport. They found the wagon trains across land slow and dangerous. The gold strike in 1849 encouraged people from all over to pour into California.

Clippers such as the Harvey were used to transport businessmen, provisions, and utensils to this new land of riches. This caused San Francisco to triplicate its population in only 10 years.

The later clippers were built with 3 masts for the ever-increasing demand for speed and volume.

Unfortunately, the extended railroads, the Panama Canal and the Suez Canal in 1870 caused the death knell for the Clippers. They became uneconomic, but will never be forgotten in that golden age of sailing ships.