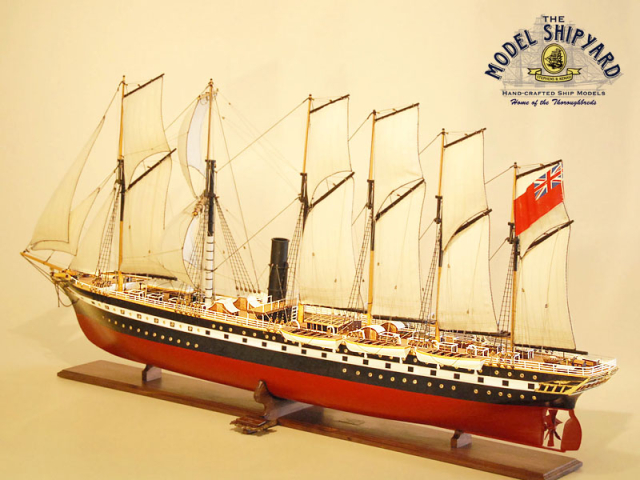 The SS Great Britain was a Steam sailing ship

This model ship of the SS Great Britain was custom built from the following information:

History of the SS Great Britain

The SS Great Britain was a Screw steamship of the Royal Navy with an iron hull and a complement of 260. She was designed by Isambard Kingdom Brunel and built by Great Western Steamship Co., Bristol, England. She was launched in 1843 and was by far the largest ship of her day. The SS Great Britain was also the first seagoing ship built of iron and the first to be driven by a screw propeller.

In 1844, under command of James Hoskens, the SS Great Britain sailed to Liverpool and loaded cargo for New York. She arrived after a crossing of 14 days and 21 hours. During her second voyage the propeller blades fell off and a new four-bladed screw had to be fitted.

On the SS Great Britain’s fifth voyage in 1846, she ran aground in Dundrum Bay in Ireland with 180 passengers on board. There was no loss of life, but the SS Great Britain could only be freed in 1847 with the help of HMS Birkenhead. The great Western Steamship could not afford to repair her and she was subsequently sold to Gibbs, Bright & Company.

The SS Great Britain remained in the Australian passenger trade until laid up in Birkenhead in 1876. She was forced back to the Falkland Islands and condemned. After 47 years as a coal and wool storage ship, the Falkland Islands Company moved her from Stanley to Sparrow Cove where the ship was abandoned.

In 1967 the SS Great Britain Project Committee was formed to bring the ship back to Bristol for restoration. In 1970 she was towed from Stanley to Bristol.

The original intent was to restore her 1843 state. However, this changed and the conservation of all surviving pre-1970 material became the aim. By 1998 the survey discovered that the hull was continuing to corrode, because of the humid atmosphere of the dock. Extensive conservation work began, by installing a glass plate across the dry dock at the level of the water line and two dehumidifiers to keep the humidity beneath 20%. After completion, she was “re-launched” in July 2005 and visitor access has been restored.