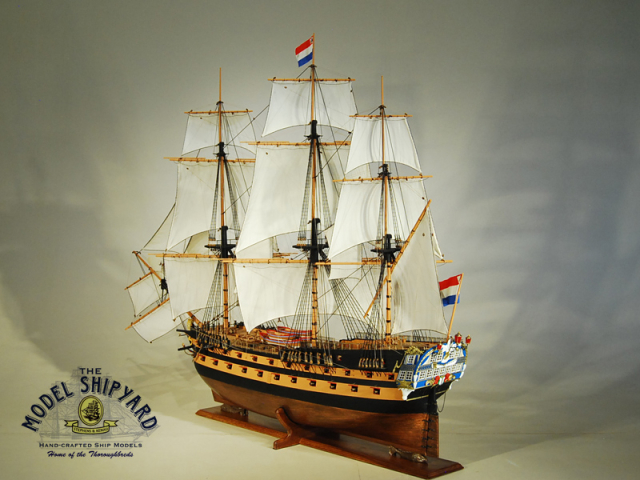 De Delft was a 56-gun fourth rate ship of the line.

This model ship of the De Delft was custom built from the following information:

About the construction of the De Delft wooden scale Model Ship

The full-rigged, 56-gun fourth rate ship of the line, De Delft, served the Dutch Republic as well as the Batavian Republic. The Admiralty of the Meuse ordered her in 1782. The United Netherlands Navy commissioned her in May 1783.

De Delft saw action in 1787 when she protected Dutch Traders against Barbary pirates in the Mediterranean.

In 1793 under the command of Theodorus Frederik van Capellen, De Delft freed 75 Dutch slaves from Algiers.

In 1795 the French conquered the Dutch Republic and it became the Batavian Republic. The French unarmed De Delft, but she was later reactivated under Captain Gerrit Verdooren van Asperen in the war with Britain.

De Delft took part in the battle of Camperdown on 11 October 1797. Four days later she was captured by the British and sank on 15 October 1797 while being towed to Britain.

A replica of De Delft is being built in Rotterdam at the Historical Shipyard Rotterdams Welvaren in Delfshaven, not far from the place where the original Delft was built.