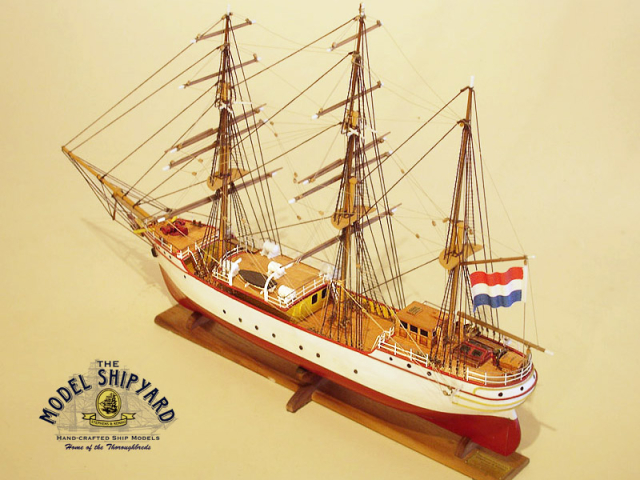 Europa was a three-masted steel barque.

This model ship of the Europa was custom built from the following information:

About the construction of the Europa wooden scale Model Ship

History of the Europa

The Europa is a Three-masted steel barque, built by H.C Stülcken & Sohn shipyard in Hamburg, Germany in 1911, with a compliment of 64.

Originally the Europa was named Senator Brockes. Until 1977, it was in use by the German Federal Coast Guard as a lightship on the river Elbe. In 1985 a Dutchman bought her and in 1994 she was fully restored as a barque, a three-mast rigged vessel, and retrofitted for the special-purpose of sail training.

She rounded Cape Horn in 2002 and 2013.   In 2010 the Europa participated in Velas Sudamerica 2010, a historical Latin American tour by eleven tall ships to celebrate the bicentennial of the first national governments of Argentina and Chile.

The Europa circumnavigated the world in 2013-2014 with two other Dutch tall ships, Tecla and Oosterschelde. In October 2013 she participated in the International Fleet Review 2013 in Sydney.

Learn more about the Europa: https://en.wikipedia.org/wiki/Europa_(ship)