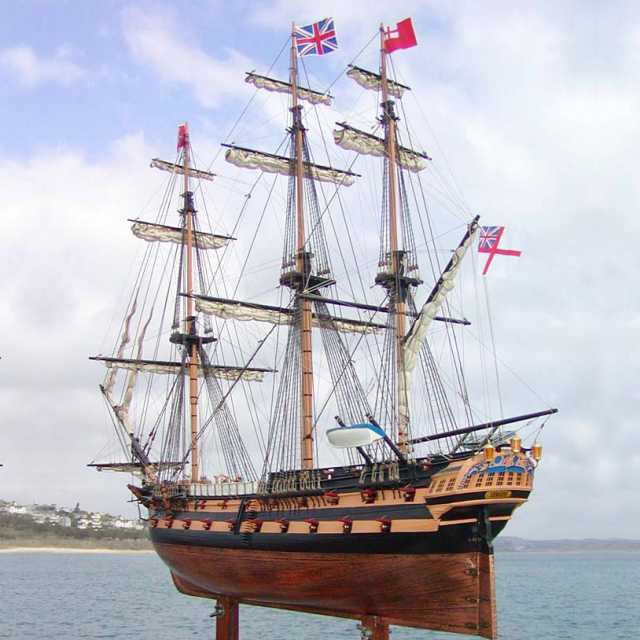 HMS Serapis was a British frigate launched by the Royal Navy in 1779. The vessel was named after the god Serapis in Greek and Egyptian mythology. The vessel was captured by Americans during the American Revolutionary War. American Revolutionary War battle HMS Serapis was designed as a 5th Rate vessel armed with 44 guns (20 18-pounders, 20 9-pounders, and 4 6-pounders). On 23 September 1779, commanded by Captain Richard Pearson, she engaged the American warship USS Bonhomme Richard under the command of John Paul Jones in the North Sea at the Battle of Flamborough Head, England. At the time of this battle, the ship carried 50 guns, having an extra 6 6-pounders.[1] The two vessels exchanged heavy fire and Bonhomme Richard lost most of her fire power, but by attaching the two ships together, Jones was able to overcome much of Pearson’s advantage.[2] The famous quote, “I have not yet begun to fight!”[2] was Jones’s response to Pearson’s premature (and probably not serious) call for Bonhomme Richard to surrender. The battle raged on for three hours as the crew of Bonhomme Richard tenaciously fought Serapis, raking her deck with gunfire. Eventually, Alliance, a frigate in Jones’s squadron, began firing at both the attached ships indiscriminately. Bonhomme Richard began to sink, but Captain Pearson, unable to aim his guns at the frigate because he was tied to Jones’s ship, surrendered, handing Serapis over to the Americans. Aftermath Jones sailed to the neutral United Provinces (the Netherlands), but diplomatic complications arose because the Dutch authorities did not recognize the United States. An improvised Serapis flag was secretly entered into the Dutch records to avoid the charges of piracy. Serapis and her consort Countess of Scarborough were later declared as French captures. Although the two British vessels had lost the battle, they had succeeded perfectly in protecting the very valuable convoy, and both captains were well rewarded. Fate of the Serapis The French commissioned the Serapis to a privateer named Roche who planned to use the ship along with the British in the Indian Ocean. However, in July 1781 the ship was lost off the coast of Madagascar when a sailor accidentally dropped a lantern into a tub of brandy. The crew fought the fire for two and one half hours, but the flames eventually burned through the spirit locker walls and reached a powder magazine. The resulting explosion blew the stern off the ship and the vessel sank. The remains of the Serapis were located in November 1999 by American nautical archeologists Richard Sweet and Michael Tuttle.