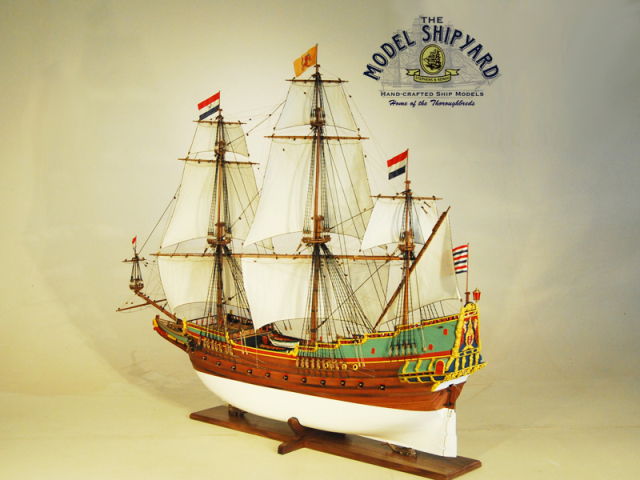 The Batavia was a Dutch East Indiaman ship

About the construction of the Batavia wooden scale Model Ship

History of the Batavia

The Batavia was a three-masted, Dutch East India Ship with a wooden hull and an armament of 28 guns.   She was built by the VOC, in Amsterdam, Netherlands and launched in 1628 with a complement of 341, including passengers.

The Batavia, designed for a roundtrip between the Netherlands and the East Indies, sailed from Texel in 1628 under Captain Adriaen Jacobsz. The Batavia was one of a fleet of eleven ships, under the overall commander of Fleet President Francisco Pelsaert.

As soon as the ships rounded the Cape of Good Hope, all VOC ships were ordered to sail east for 3000 miles, between 36ºS and 42ºS before turning north to Java. As they could not determine longitude at sea, shipwrecks on the western coast of Australia were certain to happen. As a result, in 1629, the Batavia with some of the other ships ran aground in the middle of the night, on the Frederick Houtmann’s rocks. All attempts to save the Batavia were of no use.

All the ships crew and passengers were divided onto two islands, 180 on one and 40 on the other. Pelsaert went to look for water with two of the ship’s boats, finding none he decided to head for Java. He and 48 of the crew reached the city of Batavia 33 days later.

Pelsaert was put in command of the ship Sardam, in order to rescue survivors and salvage riches left on the Batavia’s shipwreck. Two months later he reached the islands only to find that a bloody mutiny, led by Jerinimus Cornelisz, had taken place and more than 100 castaways, including woman and children, were murdered.

All the mutineers were caught and put to trail aboard the Sardam. Of the Batavia’s original complement, 60 drowned and 125 were murdered.

The Sardam managed to save 74 survivors, 9 chests of silver, 2 cannons and other artifacts with a combined value of 210,500 guilders.

Between 1973 and 1976 a large part of the stern, hull and other artifacts were recovered.

In 1995, a replica of the Batavia was launched at Lelystad in the Netherlands where it is still on display to visitors.

Learn more about the Batavia