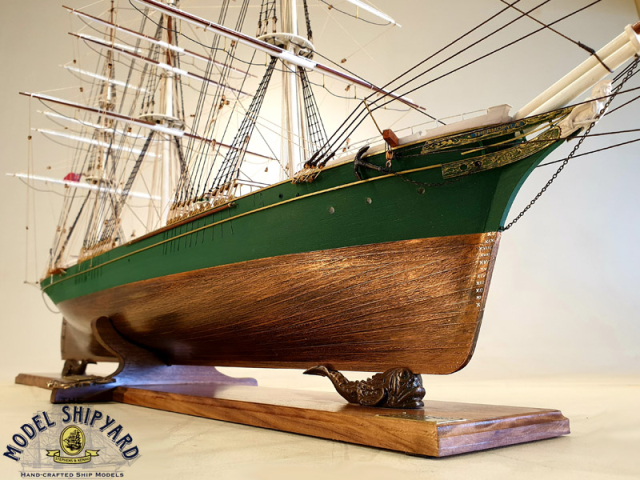 The Thermopylae was built in 1868 at the shipyard of Walter Hood & Co., Aberdeen, for George Thompson’s Aberdeen White Star Line. She measured 212.0 ft x 36.0 ft x 20.9 ft and 948 tons net. She was designed as an extreme clipper for the China tea trade with composite construction and rigged as a three-masted ship.

On her maiden voyage, captained by Robert Kimball, Thermopylae made a record crossing from Gravesend to Melbourne in 63 days. On her continued voyage from Newcastle NSW to Shanghai with coal, she set another record between those two ports of 31 days; and finally on the last leg of her maiden voyage, established a short-lived record of 91 days from Foochow to London.

Thermopylae’s great rival, the Cutty Sark was built for John ‘Jock’ Willis whose ambition it was for her to be the fastest in the annual race to bring home the first of the new season’s tea from China. In 1872 Thermopylae left Shanghai with a cargo of tea for London in company with the Cutty Sark. After racing each other for two weeks, the Cutty Sark lost her rudder after having passed the Sunda Straits. Thermopylae finally arrived in London only seven days ahead of her rival. Though the Cutty Sark made some good performances, she never managed to outrun the Thermopylae on the China tea trade.

Fate was to thwart her owner’s hopes in the tea trade: in the year after she was launched, the Suez Canal was opened, allowing steamers to reach the Far East via the Mediterranean, a shorter and quicker route not accessible to sailing ships, whose freights eventually fell so much that the tea trade was no longer profitable. So Thermopylae’s involvement in the China run was short lived, her last cargo of tea being carried in 1881.

First sold to W. Ross & Co, London, then to Redford, Montreal in 1890, who rigged her as a barque, Thermopylae traded for the next 15 years in the timber and rice trades between Asia and the West coast of North America. Even in her cut down form, she still performed outstandingly; she set a new record between Victoria, BC and Hong Kong of 23 days.  On one occasion, she held her own against the Canadian Pacific mail steamer Empress of India bound from Yokohama to Victoria B.C., which was logging 16 knots, for three days.

In 1895 Thermopylae was sold to the Portuguese Navy, who re-named her Pedro Nunes. It was intended to convert her to a training ship, but the extent of rot in her hull precluded this and she was reduced to a coal hulk. On 13th October 1907, she was towed out her berth and sunk with full naval honours by Whitehead torpedo off the mouth of the River Tagus, at a Naval regatta presided over by the Queen of Portugal. Though second to none in her prime, the Thermopylae came to a lonely and undignified end to sink beneath the waves which she so proudly battled for more than thirty years.

Out of sight, out of mind, Thermopylae was yet regarded as the fastest clipper ship to have sailed the oceans of the world, her memory living on in the hearts and minds of only an informed few.