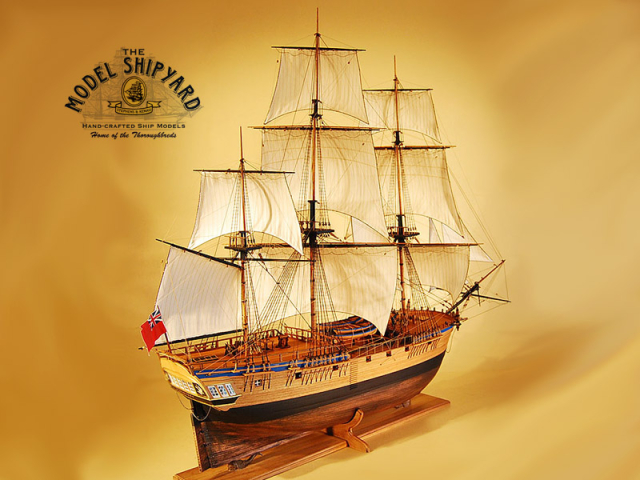 This model ship of the HMS Discovery was custom built from the following information:

About the construction of the HMS Discovery wooden scale Model Ship

The HMS Discovery was a full-rigged, Royal Navy survey ship, built by Randall, Gray & Brents of London in 1789. She had an armament of 20 guns and a standard crew complement of 100. HMS Discovery was best known as the lead ship in Captain George Vancouver’s explorations of the West Coast of North America in his famous 1791-1795 expedition.

On 1 April 1791 the HMS Discovery and HMS Chatham departed from Falmouth to explore the South Coast of Australia. Over the course of the next 4 years, Vancouver’s Discovery surveyed the North Pacific Ocean, wintering in Spanish California or Hawaii.

The Discovery’s mission was to exert British sovereignty over part of the Northwest Coast following the hand-over of the Spanish Fort San Miguel at Nootka Sound, although exploration in co-operation with the Spanish was an important secondary objective. Exploration work was successful as relations with the Spanish went well. Despite 4 years of dispatches with their governments, Vancouver and the Spanish Commandant Juan Quadra failed to formally conclude an agreement. Remarkable the Discovery only lost 6 sailors in accidents over these 5 years.

After 4 years at sea, Discovery was in great need of repair. She was laid up until 1798 when she was refitted as a bomb vessel and re-commissioned under Commander John Dick. As a bomb vessel Discovery had an armament of 1 x 13” mortar; 1 x 10” mortar; 8 x 24-pounder carronades & 2 x 6-pound guns.

In October 1800 Commander John Conn replaced Dick. HMS Discovery took part in the Battle of Copenhagen in 1801 and was awarded a Naval General Service Medal. She was paid off in October that year and was laid up in ordinary in May 1802.

The HMS Discovery was broken up in 1834.