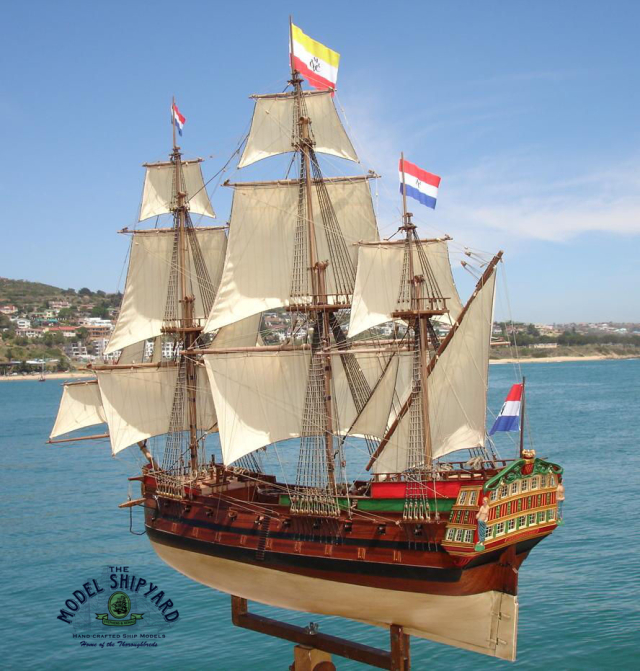 Amsterdam was a Dutch East Indiaman built for the VOC Company

This model ship of the Amsterdam was custom built from the following information:

About the construction of the Amsterdam wooden scale Model Ship

History of the Amsterdam (VOC Ship) 1744

The Amsterdam was a Dutch East Indiaman cargo ship of the VOC, built by Oostenburg Shipyard in Amsterdam in 1744. She had an armament of 42 guns and a complement of 191 crew, 123 soldiers and 3 passengers.

The Amsterdam joined the VOC’s autumn fleet to Batavia. She departed from Texel on 15 November 1748 under Captain William Klump, with a crew of 203, 127 soldiers and 5 passengers but was three times forced back by North Sea gales.

On 8 January 1749 Amsterdam sailed in company with five other ships, only to encounter more gales of the Downs in the English Channel until she grounded and lost her rudder. Klump anchored of Hastings. Threatened by mutiny – his sailors dying at a rate of 3 a day of Black Death – Klump attempted to the Amsterdam aground in an effort to save her, which he did on 26 January 1749, off Bulverhythe, just west of Hastings. The passengers and most of the crew had landed safely, although within 2 days 50 more crew had died ashore and many were too ill to leave the ship.

Amsterdam settled into the beach at the rate of about 6 inches a day, and her keel came to rest about 20 feet below the surface. The wreck was never forgotten and during the summer of 1969 curious workers laying a sewage pipe began exploring the area with a backhoe and located the Amsterdam beneath the sand.

At this point, a marine archaeologist, Peter Marsden, and others, legally secured the Amsterdam when Britain accepted the Dutch government’s right to the wreck. Although there was some looting at the time, the Amsterdam’s remaining stores included more than 300 00 florins worth of silver, medical supplies, clothing, wine and beer and other artifacts of shipboard life.

In 1989 the city of Amsterdam launched a full-scale sailing replica of the East Indiaman called Amsterdam II. She was built by 400 volunteers using tools of the period at Lelystad, floated to Amsterdam and moored next to the Netherlands Maritime Museum where she can be visited.

As for the original Amsterdam, the timbers are exposed at very low tides in the sand just opposite the footbridge over the railway line at Bulverhythe. Several decks and part of the bowsprit lie submerged in the mud in remarkably good condition, and much of the cargo is still aboard.

Learn more about the Amsterdam: https://en.wikipedia.org/wiki/Amsterdam_(VOC_ship)