Bluenose I & IIBack to Historical Ships 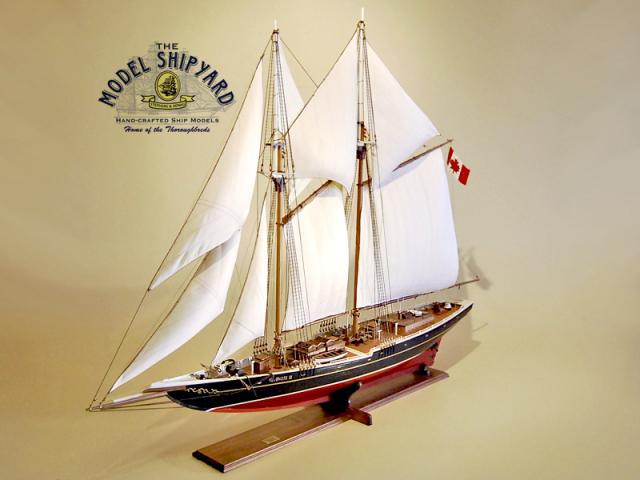 The Bluenose was a fishing and racing gaff rig schooner.

This model ship of the Bluenose was custom built from the following information:

The Bluenose painted in Original Colours. We can build either the original Bluenose I or the current Bluenose II for you.

About the construction of the Bluenose wooden scale Model Ship

The History of the Bluenose I

The Bluenose was a Canadian racing schooner designed by William J Roué and built by Smith & Rhuland, Lunenburg, Nova Scotia. She was launched in 1921 with a complement of 28.

The name “Bluenose” originated as a nickname for Nova Scotians. She was designed specifically to race for the International Trophy, a prize established by W.H. Dennis, publisher of the Halifax Herald. Her first skipper was Angus Walters, one of the most successful fishermen on the Grand Banks.

In the first International Fishermen’s trophy race held in 1920, the Bluenose beat the Elsie and thus returned the trophy to Nova Scotia. The Bluenose kept the trophy for the next 17 years. She was not only a racer but also a fishing craft.

With the outbreak of World War II and German U-boats a threat to the Grand Banks schooners, the Bluenose was sold to work as a freighter in the West Indies. Under Captain Wilson Berringer the Bluenose was grounded off Haiti in 1946.

After her loss, the Bluenose’s memory remained very much alive in the Canadian imagination adorning Canadian stamps and coins.

The History of the Bluenose II

In 1963, the Bluenose II, a replica of the original, was built in Lunenburg financed by the Oland Family. In 1971 she was sold to the Nova Scotia government.

She served as a goodwill ambassador and tourist attraction. In honor of her predecessor, she did not officially race. The vessel was decommissioned and dismantled in 2010.

Learn more about The Bluenose – Wikipedia