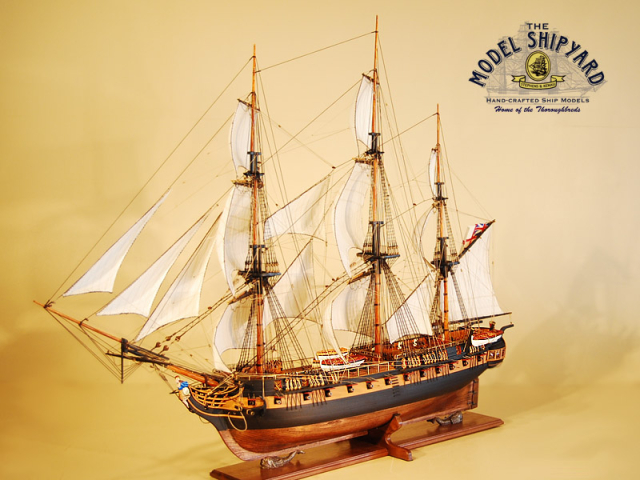 This model ship of the HMS Surprise was custom built from the following information:

About the construction of the HMS Surprise Wooden Scale Model Ship

Learn more about the HMS Surprise

Our Research Our information was obtained from a number of sources, amongst others: “The History of the French Frigate” by Jean Boudriot. “Seamanship in the Age of Sail” by John H Harland. References to the ship the actual book “The HMS Surprise” (I read the book again). Various paintings of the ship by the world renowned painter of the front covers of the Patrick O’Brien series, Geoff Hunt. Comments on the building of a model of the HMS Surprise by John H Harland. The Ship Patrick O’Brien was presumably thinking of the 6th Rate 24 gun SURPRISE, which started life as the French L’UNITE, captured in 1796 by HMS INCONSTANT. I have been told that the plans survive in the National Maritime Museum. She was 126 feet long on the gundeck, 31 ft 8 in. beam. 579 tons, and registered as a 28-gun ship although she actually carried twenty-four 32-pounder carronades on her main deck, and eight 32-pounder carronades on her quarterdeck and forecastle, with two or four long 6-pounders for chasers. The SURPRISE gained renown in 1799 when Captain Hamilton recaptured the Hermione from the Spaniards, who were in possession after a group of mutineers brought her into Puerto Cabello. In a daring cutting-out expedition, six boats from Surprise recaptured the Hermione in the night, and towed her out to sea. Captured French Frigates was much sought after by the English seamen because of their speed and manoeuvrability. Because of the very streamlined design of the hull below the water line these French frigates could outrun most other ships in the lightest of winds. The model The scale of the model is 1:60. Overall length is 1050mm and the Height 670mm. (This is usually the size of a good display model.) The hull of the model is built of Sapelie-Mahogany and painted black with ochre (yellow) line along the gunports. The model is copper sheathed below the water line. All the deck fittings and trimmings are made of American Walnut. The decks are made of Anagre. The masts and spars are also made of American Walnut. All guns, gunports, shipswheels and anchors are cast in brass and bronze.