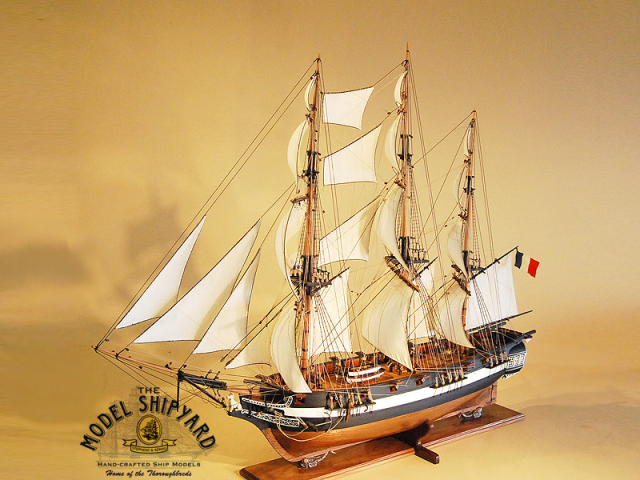 About the construction of the Astrolabe Model Ship

Under the command of Louis Isidore Duperrey, the Coquille circumnavigated the earth from 1822 – 1825.

In 1826 the Coquille was renamed the Astrolabe. The name was derived from an early navigational instrument, the astrolabe, a precursor to the sextant. Under the command of the French explorer Dumont d’Urville the Astrolabe sailed from Toulon on 22 April 1826 for a circumnavigation of the world that lasted nearly 3 years.

In January 1827 the Astrolabe arrived in Tasman Bay. A number of landmarks around Tasman Bay were named by Dumont d’Urville.

He wanted to explore the Pacific Ocean further, however, King Louis-Philippe ordered them to claim the South Magnetic Pole for France. So on 7 September 1837, the Astrolabe and Zélée sailed from Toulon.  They located some land only sketched on the map, which Dumont named Terre de Louis-Philippe, the Joinville Island group and Rosamel Island. At the end of February 1838, he accepted that they could not go further and directed the two ships toward Talcahuano in Chile.

The Astrolabe and the Zélée sailed to the Marquesas Island and on to Hobart in Australia. The expedition followed the coast of Antarctica.  On 1 February 1840, the ships sailed towards the Auckland Islands.

The Astrolabe was scrapped in 1851.

Learn model about the Astrolabe…Wikipedia