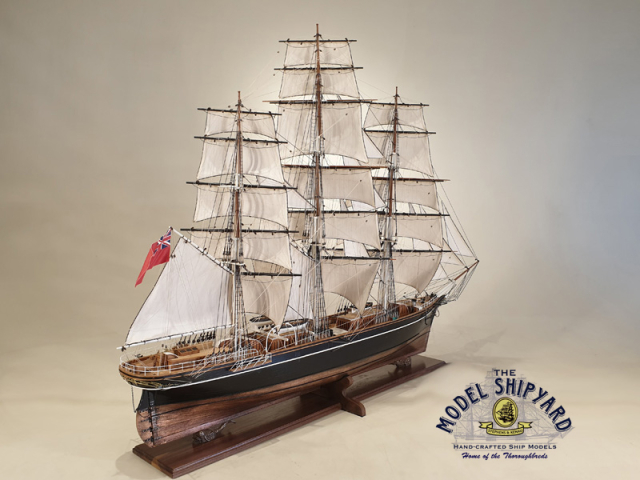 The Cutty Sark was a clipper.

This wooden scale model of the Cutty Sark was custom built from the following information:

About the construction of the Cutty Sark Wooden Scale Model Ship

History of the Cutty Sark

The Cutty Sark was one of the last clippers built for the China tea trade by Scott, Linton & Company, Dumbarton, Scotland. She was launched in 1869 with a complement of 28.

She was built for John ‘Jock’ Willis who wanted the Cutty Sark to be the fastest ship in the annual race to bring home the first of the new seasons tea from China.

The Cutty Sark name was “short shirt”; a Scottish name coming from the poem “Tam O’Shanter”, in which Tam secretly spies on the witch, Nannie, who is clad in a Cutty Sark.

Only the finest materials were used to build her.  Willis, however, was very disappointed in the Cutty Sark’s early performance, as she never beat her rival the Thermopylae, on her passage home from China.

Their most dramatic encounter took place in 1872 as they both sailed, fully loaded from Shangai to London.  The Cutty Sark was about 400 miles ahead of the Thermopylae in the Indian Ocean when she lost her rudder and thus lost the race.

There was a great rivalry between clippers and steamships as the steamships were faster and cheaper to carry cargo from the East.  In 1878 the Clippers, as a result of this, were out of the tea trade.  The Cutty Sark was used to cargo coal, jute, hemp, wool or whatever cargoes were available. Unfortunately, her cargo capacity was much smaller than the full-bodied sailing ships of the period and she was barely profitable.

In 1883 she was under command of Captain W. Moore, carrying a cargo of wool from Newcastle, Australia in a splendid time of 79 days to England.  Richard Woodget became her celebrated master and the Cutty Sark remained in the wool trade through 1893. She completed her last voyage to Australia in 1895 and was sold to J.A. Ferreira of Lisbon.

In 1916 the Cutty Sark was dismasted in a hurricane and re-rigged as a barkentine.

In 1922, Captain W. Dowman purchased her and restored her as a training ship at Falmouth. After his death, his widow donated the Cutty Sark to the Thames Nautical Training College and in 1954 she was opened as a museum at Greenwich.