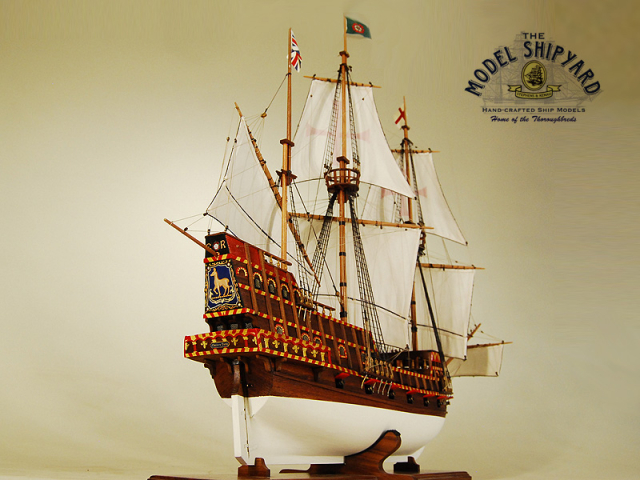 The Golden Hind was an English Galleon – Sir Francis Drake

This model ship of the Golden Hind was custom built from the following information:

About the construction of the Golden Hind wooden scale Model Ship

History of the Golden Hind

The Golden Hind was an English Galleon with an armament of 18 guns, built in Plymouth, England and launched in 1576 with a complement 85.

She was best known for her Global circumnavigation between 1577 and 1580 under Sir Francis Drake. The Golden Hind was first known as The Pelican and later renamed by Drake. The choice of name was political, to compliment his patron Christopher Hatton, who sponsored Drake’s world voyage. Hatton’s family coat of arms was a Golden Hind.

Drake made two voyages to the Spanish Main and was driven by his anti-Catholicism. Queen Elizabeth secretly supported him in his mission. His mission was, to pass through the Strait of Magellan and to return via the Northwest Passage, to establish relations with people not yet subject to European princes and to plunder Spanish ships.

Drake’s command consisted of 180 men in five ships with The Pelican being the flagship. The expedition cleared Plymouth in 1577 and reached the coast of southern Brazil, proceeding to the River Plate, and then on to Puerto San Julian, reaching the Brazilian coast in 1578. At the entrance to the Strait of Magellan, Drake rechristened his ship, Golden Hind.

Drake established that the Strait of Magellan did not separate South America from Terra Incognita Australia but that the southern shore was made up of islands, now known as the Drake Passage.

Drake captured the Nuestra Señora de la Concepción off Colombia, which had the largest treasure up to date, over 360,000 Pesos which was about half the English Crown’s revenues for a year. Drake sailed north, claiming this land Nova Albion. In September the Golden Hind landed in either the Palau or Ladrones Islands. Spending a month caught in the maze of islands in the Indonesian archipelago. Drake weighed anchor on a nonstop journey of over 9,700 miles without any incidents.

The first English circumnavigation of the globe ended when Golden Hind sailed into Plymouth in 1580 after a voyage of 2 years and 10 months. This was a great achievement and Queen Elizabeth knighted Drake on the decks of Golden Hind in 1581 at Deptford.

Queen Elizabeth ordered the Golden Hind displayed in dry-dock where she remained on public view for nearly 100 years (1660) before she eventually rotted away and was finally broken up.

2 Replicas of the Golden Hind exist; one replica has been permanently moored in the harbor of the seaport Brixham in Devon since 1963. The other replica has been berthed at St Mary Overlie Dock on Cathedral Street, in Backside, Southward, London since 1996.