How We Do It

How We Do It

One has to establish exactly what a ship looked like at the time of it making name for itself, be it a famous voyage, battle or some other event. Our research usually starts with obtaining copies of the original plans of the ship. Sometimes one can also get a good set of ship model plans from companies that specialize in ship model plans.

When a ship was damaged in a battle or a storm it was often not just repaired but refitted as well. Because such refits often resulted in a ship being modified quite extensively, one has to spend a lot of time piecing it all together. For this we would study the reports from the shipyards where the refit took place. Salvage reports of ships that was sunk also reveals a great deal of information. Newspaper articles of the time are often also source of information. Even myths and folklore sometimes reveal facts that help filling in the missing pieces. Ultimately a visit to the actual ship or replica, where it is often dry-docked at some maritime museum, helps one to piece the puzzle together.

We have a vast library of books and ships plans that we have built up over the years. We also have an association with most major Maritime Museums around the world. We are able to research virtually any vessel that has ever sailed the Seven Seas. Our research capabilities are beyond compare.

Once we have established the hull lines, layout of the different decks, armament and gunports, head and stern details with their artwork, mast construction and sailplan design starts in all earnest. In order to facilitate up or down scaling of the model our designs are computer aided.

We can build them any size you want.

We use the Double Plank-on-Bulkhead method to construct the hull of the model. We do not work from ship model kits because they are mass produced and are rarely accurate. Most of the parts supplied with these kits are out of scale. 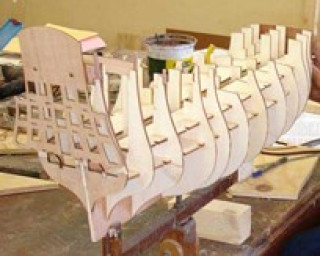 The bulkheads are cut from selected pine plywood using the false keel and false deck design. This not only results in a very strong and stable hull but also ensure perfect alignment of all the bulkheads (ribs). This also prevents the model from hogging (arching its back). 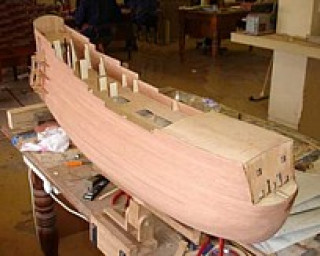 The hull is then built up plank by plank in the same pattern as the real ship. For the planking we use mahogany. The hull is then inspected and smoothed out. Then the hull is planked a second time with mahogany veneer. This ensures durability and also gives a perfect finish that shows the individual planking strakes along the length of the hull. 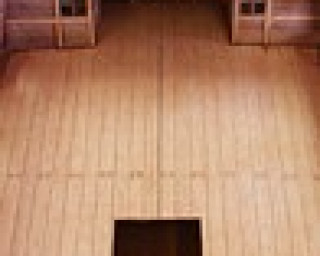 After the planking the deck is laid plank by plank also following the same pattern as the real ship. For this we use anagre, a light brown wood that comes from South America. This gives the deck the appearance of a deck regularly scrubbed with holy stones. Treenails are also added to the deck for realism. 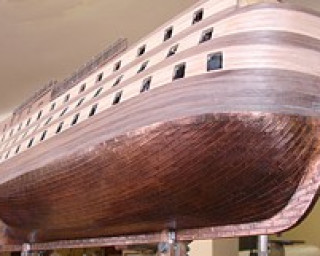 From around 1750 the hulls of most ships were copper sheathed below the waterline. This was done for protection against the Toredo worm and also to stop marine growth on the hull. The Toredo was a wood boring worm as thick as a man’s finger and as long as his forearm. Once a ship was infested with the Toredo, the end of the ship was in sight.

We also copper plate the hull of the model with real copper in the same pattern as the real ship. For this we use about a thousand individual little copper plates. The copper is matured by treating it with patina and then scoured with steel wool until the desired effect is achieved. This gives the copper a tarnished antique appearance. 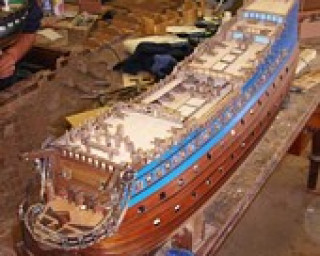 Once the hull is complete and has passed all inspections the fitting of the model starts. Much attention as paid to the scale of every single part of the model. Our attention to scale and detail is one of the aspects that distinguish our models from the rest. 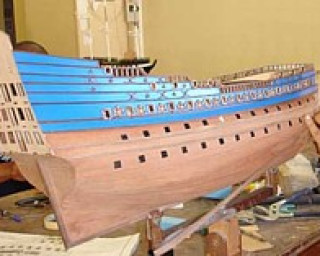 Various layers of paint is applied until the desired effect is achieved. We can finish a model in one of a number of ways.

Firstly. The model is painted in the colors of the original ship.
Secondly. The model is varnished, in the case of a model with a natural wood finish.
Thirdly. You can choose whether you want your model finished in the splendor of her launching day or the weathered look of a ship in her workaday. 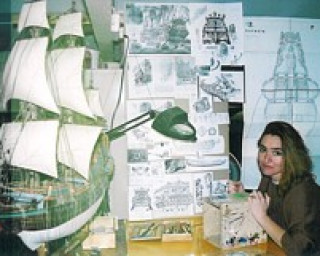 Apart from myself being a sculptor, we also employ a fulltime fine artist. Once we have completed the research of the stern and figurehead details we sculpt the ornaments in clay oversize. We then reduce the artwork to the correct scale using an old fashioned 3D pantograph. This way we can ensure that the artwork is aesthetically pleasing. We then make a mould and cast the artwork in bronze or aluminum using the cold cast method. Cold casting ensures super detailed artwork.

The head rails, figurehead and transom with its galley windows and ornaments are hand crafted, hand painted and built into the model. 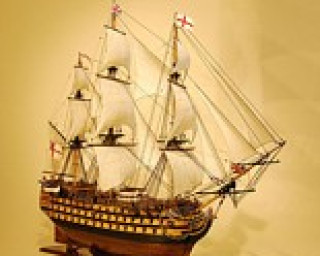 We are the only models builders in the world that has perfected the art of shaping sails as if they are billowing in the wind. This makes a model come alive and makes it look like a ship in motion. I have invented a machine with which we do this. The sails are made of cotton. 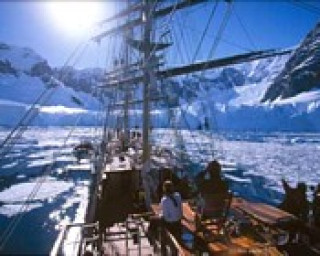 Being a passionate sailor I have studied the art of sailing these old ladies extensively over many years. I have sailed in a number of Tall Ship Races aboard various square-riggers. Much of this knowledge is incorporated into our models. This is the reason why our models have a lifelike appearance.

The standing rigging of the model is done by using the exact same knots as was used on the original ship. There are literally thousands of these tiny little knots on the model. For this we use black women from the Xhosa tribe here in South Africa. They are usually small people with tiny hands. They are also renown for their patience and meticulousness.

For the installation of the running rigging and sails we also ladies. For this job you need tiny and steady hands. Literally hundreds of hours are spent rigging a model.

We also manufacture our own ropes in-house because the thickness, color and texture of the ropes must be correct and perfectly to scale.

We can rig a model in one of a number of ways:

Firstly, full sail with sails square as if the ship is running downwind.

Secondly, full sail with sails trimmed at about forty-five degrees as if the wind is coming over side (port or starboard quarter). The benefit of trimming the sails is that the model now becomes much narrower and can fit on a mantle piece. Trimming the sails gives the impression of a ship in motion. Needless to say, trimming the sails makes the model absolutely spectacular.

Lastly, no sails at all but with some of the running rigging in place. 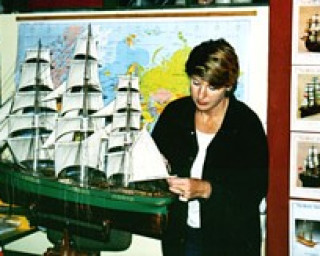 I inspect each model after every stage of the process. Only once the model has passed the inspection will the craftsman be allowed to proceed to the next stage. This way I can ensure that the final result conforms to our standard of excellence from the bottom up.

This is my wife Louise doing final inspection of a model. She loves finding fault with everything I do and she makes sure that she does not miss a thing and a chance to rub my nose in it. Just joking! Louise is as passionate about sailing as I am. You will go a long way to find a lady who knows more about rigging than Louise.