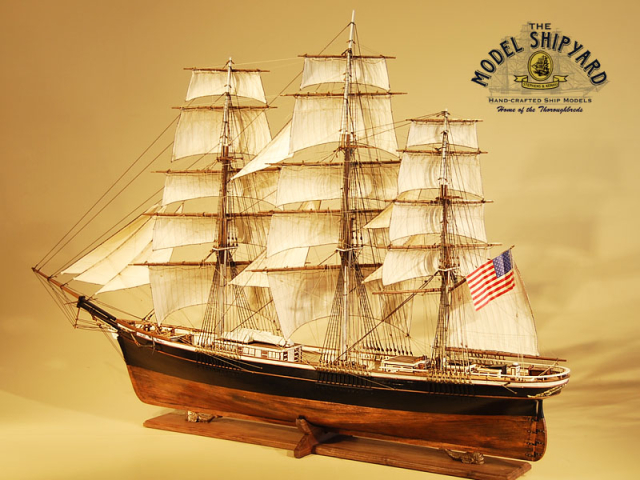 This model ship of the Flying Cloud was custom built from the following information:

About the construction of the Flying Cloud wooden scale Model Ship

History of the Flying Cloud

The Flying Cloud was an American Clipper, built by Donald McKay, East Boston in Massachusetts for Enoch Train of Boston and launched in 1851. She was sold to Grinnell. Minturn & Company of New York and was known as the fastest clipper ship ever launched.

The Flying Cloud departed New York under command of J.P. Cressy in 1851 and reached San Francisco in a record time of 89 days and 8 hours. The average time for clipper ships being more than 120 days. This was remarkable and even more so when the Flying Cloud bettered her own record three years later with 13 hours. She held the record for over 100 years, from 1854 – 1989.

On the Flying Cloud’s fourth voyage she set sail for Hong Kong to load tea.   On her way back the Flying Cloud was grounded on a coral reef and started leaking profoundly. With pumps manned around the hour, the Flying Cloud arrived in New York with her million-dollar cargo intact.

On her following voyage, under Captain Reynard, the Flying Cloud needed repairs and was put to port for a few weeks in Rio de Janeiro. From there she resumed her voyage with her best run of 113 days to San Francisco from New York.

The Flying Cloud’s last Cape Horn passage was in 1857 after which she was laid up for three years in New York. After three years in trade between England, Hong Kong, and England, the Flying Cloud was sold to T.M. Mackay & Company and put in the immigrant trade. She plied between England and Queensland with as many as 515 passengers outbound and returned with full cargoes of wool.

In 1871 the Flying Cloud was sold to H.S. Edwards who put her in trade between Newcastle and St. Johns, carrying coal and pig iron out and timber back.

The Flying Cloud grounded on Beacon Island in 1874 and had to return to St. Johns, where she was burned for her fastenings in June the following year.