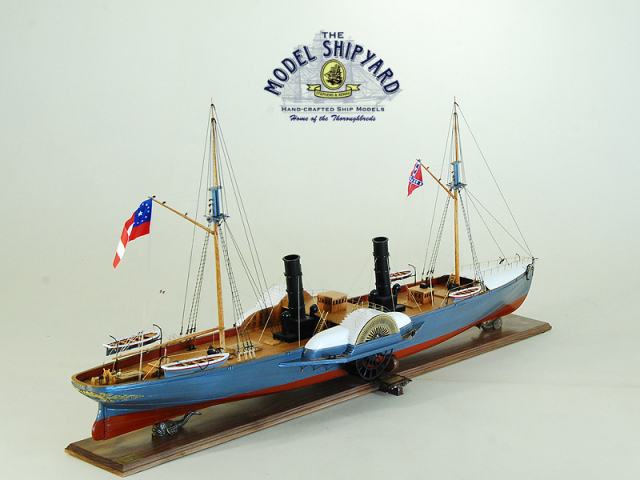 The Hope was a blockade runner.

This model ship of the Hope was custom built from the following information:

About the construction of the Hope wooden scale Model Ship

History of the Hope

Hope was a “very large” and “very strong” Wilmington, N. C., iron, and steel paddle wheeler, called the “finest and fastest steamer in the trade” by one observer in Britain.

The Hope was procured there for the Confederate Government shortly before or after she left the Liverpool yard of Jones, Quiggin & Co.

The Hope was a sister to the noted Colonel Lamb, which she resembled except for the presence of the usual turtleback forward. The Hope could carry a crew of 66 and over 1,800 cotton bales and possessed the safety factor of five watertight compartments. Two fore-and-aft engines of 350 nominal horsepower, supplied by 4 boilers, gave Hope the speed of 16knots and the power to outrun most of her contemporaries.

Yet the Hope was cornered on 22 October 1864 by USS Eolus, trying to enter Cape Fear River after a sixty-five-mile chase off Wilmington, the capture netted more than a thousand dollars in prize money for each member of Hope’s crew.