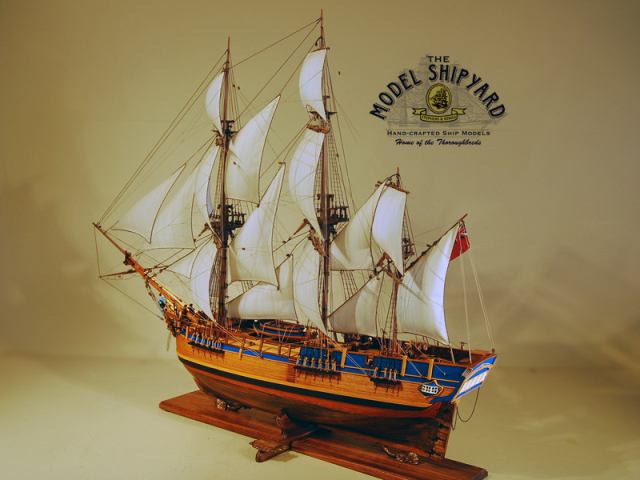 The HMS Bounty was a frigate.

This model ship of the HMS Bounty was custom built from the following information:

About the construction of the HMS Bounty wooden scale Model Ship

History of the HMS Bounty

The HMS Bounty was three masts, full-rigged ship of the Royal Navy with an armament of 14. The Bounty was built by Blaydes Shipyard, Kingdom-upon-Hull UK and launched in 1784 with a complement of 46.

From 1784 – 1787 the Bounty was known as Berthia. Her purpose was to gather breadfruit trees.

In 1787, Bligh was put in command of the HMS Bounty and left for Tahiti.   After 5 months on the Island, the Bounty weighed anchor with more than 1000 breadfruit trees on 4 April 1789. Allowing the crew to stay on the island, the crew went native without the discipline and rigid schedules. Some preferred to remain on the island. After 22 days at sea, the ships second in command, Fletcher Christian, seized the Bounty in a bloodless mutiny.

Captain Bligh with 18 sailors was set adrift in a long boat. Using only a sextant and a pocket watch, Bligh navigated the longship and reached safety within 41 days.

The mutineers settled on Pitcairn Island in 1790 and burnt the ship in Bounty Bay. Fourteen mutineers were eventually arrested in Tahiti by the men of the HMS Pandora and brought to trial in England.