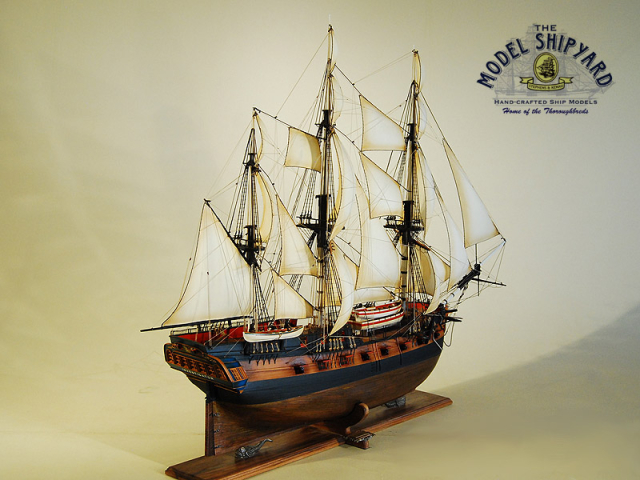 This model ship of the HMS Investigator was custom built from the following information:

About the construction of the HMS Investigator wooden scale Model Ship

History of the HMS Investigator

The Investigator is a ship-sloop build in Sunderland and was launched in 1795 under the name Fram.   She had a complement of 88 and an armament of 22 guns.

In 1798 she was purchased by the Royal Navy to serve as an escort vessel and was renamed Xenophon.

In 1804 Governor King of Sydney ordered a survey, which found that the Investigator could be repaired and returned to service.

In 1805 the Investigator sailed back to England, carrying two of Flinders’ botanists, Robert Brown and Ferdinand Bauer and their collections.

The Investigator continued in naval service for another few years, but in November 1810 the Investigator was sold with the intent to break her up. However the Investigator was not broken up but rebuilt as a commercial sailing vessel, brig or snow rigged and reverted to her former name Xenophon. As such, she continued to sail the globe up until 1861. In 1861 in Melbourne she was converted to a storage hulk and was registered as such.

In 1868 was the last change of ownership.

In 1872 the register was closed with the comment “broken up”.