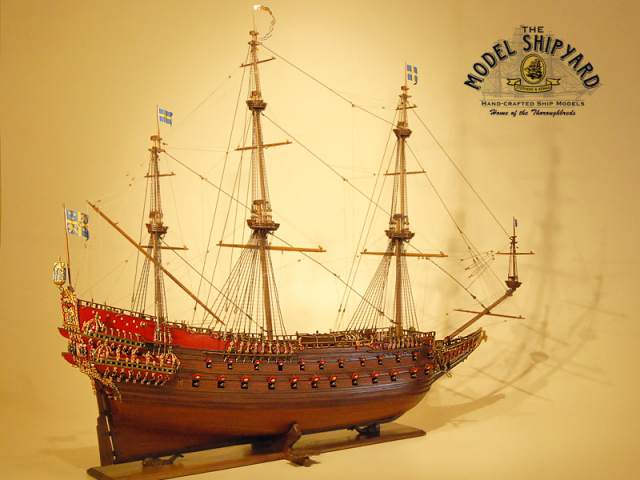 Overview The Vasa sank within one nautical mile of the start of her maiden voyage in 1628 before she even left the Stockholm archipelago. Anders Franzén had already found some 17th century wooden ships, as his hobby and obsession was looking for old wrecks. He was bent on finding Vasa and did. Franzén found her in 1956. Although she is now housed on public exhibition, more than 30 years after she was initially brought up, and 95% of her is original parts, some reconstruction work remains to be done. This ship was not excavated first and then lifted out of the water, but the reverse (Saunders, 1962:14). She was lifted up from her claybed and moved in several steps to shallower locations until she could be excavated in “dry-dock.” This was possible only because the hull was in good condition. The Baltic Sea is brackish water. It does not have a wood destroying organism called Teredo navalis which is found in the oceans. Therefore timbers long sunken in the Baltic are well preserved. Historical background A great Swedish king who ruled Scandinavia in the early 17th century had to have a fleet of warships to patrol the Baltic and ordered 4 new galleons. One was to be the royal mighty battle galleon called Vasa, greater than any ship ever built at that time. The king himself dictated the Vasa’s measurements and no one dared argue against him. It was of the type we call skeleton-build, same build as e.g. the Sovereign of the Seas from 1637 (McGrail 1993:46). It had two gun decks and held 64 bronze cannons. Various woods were used but predominantly northern oak – a very sturdy wood. It is said that a total of 40 acres (16 ha) of timber was used. Timbers of the bow were steamed (to curve them) and fixed and the close-set ribs were clad with heavy timber walls – a masterpiece of triple-laminated oaken walls 18″ (46 cm) thick. A web of masts and spars rose slowly. The top gallant on the main mast soared to 190 ft (57 m). The Vasa’s rudder stood over 30 feet tall (Almqvist 1990:6). Carvings were made separately in workshops. Later these were attached on the bow and round the high stern castle. Stern ornaments (painted red, gold, blue) were carved gods, demons, kings, knights, warriors, cherubs, mermaids, weird animal shapes – all meant to scare the enemies and also symbolize power, courage and cruelty. The ship was painted in colors of Baroque style. It took 3 steady years to build Vasa, turning her into a floating work of art and a weapon of war. Sweden had a great copper mountain, so copper was the raw material used for making bronze cannons. All in all, the king had 256 cannons made for 4 ships! As a rich, powerful and mighty monarch, “His” cannons bore the moulded letters G.A.R.S. for his Latinized name; Gustavus Adolphus Rex Sueciae. The cannons were heavily reinforced at the breech and 64 weighed approximately 100 tons. Vasa’s ballast equalled 120 tons of stone. She carried additional weight of cannon balls, gunpowder, ancillary firearms, food in casks, officers and a crew of 133 sailors. Vasa began her maiden voyage August 10, 1628, as documented from the city ship quay (Skeppsbron), and there was a light breeze from the southwest. She couldn’t sail out right away. Her sails were not up until Södermalm; the southern outskirts of the harbor. She had only sailed for less than a nautical mile before capsizing. This is how it happened. There was a sudden squall, her gun ports were still open having just fired farewell, and when she listed heavily to port, the gun ports sank below water level and water gushed in. It took only a few moments for her to sink. (This is very similar to what happened years earlier with the Mary Rose, an English vessel, sunk in 1545.) Vasa sank to 100 ft below the surface of the harbor and about 100 yards from the shore. Even back then, the harbor was cold water but possibly clearer than now. The first attempt at salvaging Vasa began shortly after the memorial service of her drowned victims. Ian Bulmer, Royal Engineer from England, succeeded in setting Vasa on an even keel, because her main mast stuck out of the water at an angle. His further efforts were unsuccessful. Most of her carvings were wrenched off with grappling irons in other salvaging attempts and these all sank into the mud. The ship settled deeper into mud and clay.