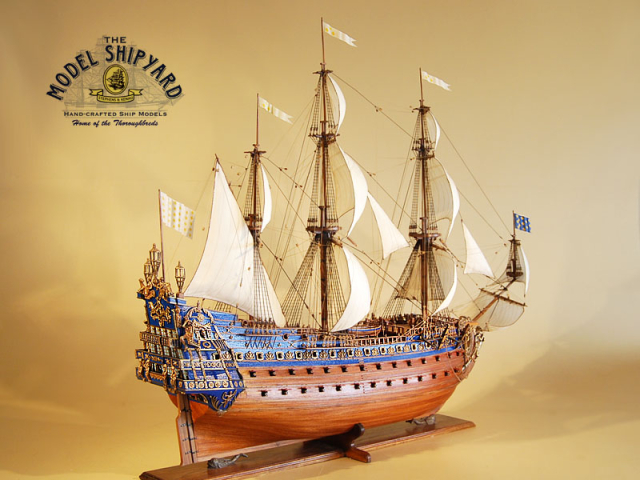 Three Masted Vaisseau First Rate Hull: wood Armament: 104 guns Built By: Brest, France,1669 Named in honor of the Sun King, Louis XIV, Le Soleil Royal was one of the most powerful ships of her day. As the flagship of the revitalized French Navy brought into being by Minister of Marine jean-Baptiste Colbert, she sumptuously decorated with wooden carvings depicting a variety of motives emblematic of the French monarch. The hull was painted a royal blue highlighted by the wales, strakes, and additional embellishments in gold. Details of the first decade of Le Soleil Royal ?s Service are obscure, but after her refit in 1689, she flew the flag of Vice Admiral Anne-Hilarion de Contentin, Comte de Tourville, Admiral of the French fleet. In March 1689 , a French fleet helped James II land in Ireland in the first of several efforts to regain his throne. In July 1690, Tourville led a fleet of seventy ships out of Brest and on July 10, he met a combined English and Dutch force of fifty-seven ships off Beachy Head. Ordered to engage the enemy against a larger fleet, Admiral Arthur Herbert, Lord Torrington lost eight ships while the French lost none in a victory they called Beziers. On May 20, 1692 Tourville met an Anglo-Dutch fleet of eighty-eight ships off Pointe de Barfleur. Touville prevented his fleet from being encircled by increasing the distance between the ships. In the battle Le Soleil Royal was so badly damaged that Tourville was forced to transfer his flag to Ambiteux the next day. Ten French ships slipped away, but Le Soleil Royal, Admirable, and Conquerant were forced into Cherbourg where they ran aground and were destroyed by English fireships.