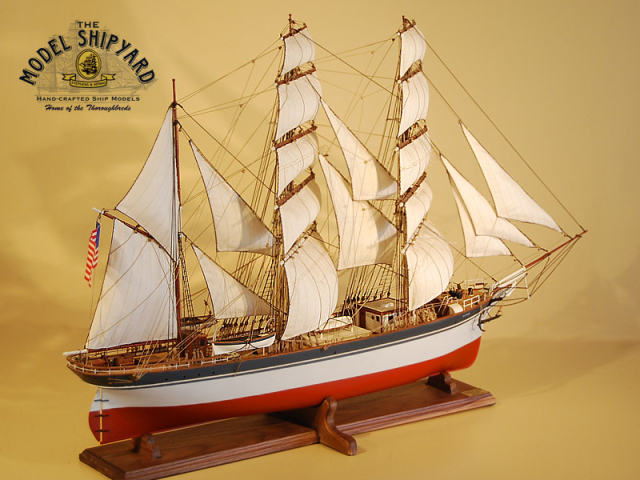 Elissa is a three-masted barque.

This model ship of the Elissa was custom built from the following information:

About the construction of the Elissa wooden scale Model Ship

History of the Elissa

Elissa is a three-masted barque with 19 sails, built by Alexander Hall & Co., Aberdeen, Scotland in 1877, allegedly named after the Queen of Carthage, Elissa (commonly known as Dido)

Elissa was launched under the British flag on 27 October 1877, sailing under Henry F Watt of Liverpool – who sailed twice as her captain – with a cargo of coal for Brazil.

In 1960 Elissa was sold to Greek interests and renamed Christophoros and used as a motorship in the Aegean. In 1967 she sailed under the name Achaeos and in 1969 as Pioneer.

In 1970 a maritime archaeologist, Peter Trockmorton, with the assistance of the San Francisco Maritime Museum, rescued Elissa from destruction in Piraeus. Five years later the Galveston Historical Foundation purchased her and completely restored her to her original rig. Her first voyage as a restored ship was in 1985.

When Elissa is not sailing, she is moored at the Texas Seaport Museum in Galveston.

Elissa remains one of the world’s oldest sailing hulls still in operation.

Learn more about the Elissa: https://en.wikipedia.org/wiki/Elissa_(ship)