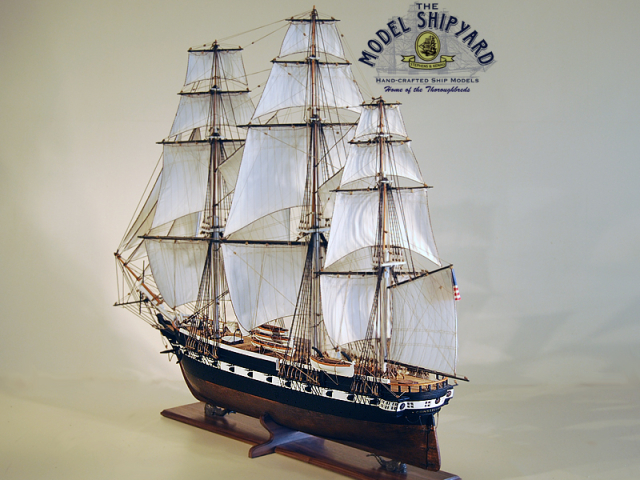 USS Constellation was an American sloop-of-war.

This model ship of the USS Constellation was custom built from the following information:

About the construction of the USS Constellation wooden scale Model Ship

History of the USS Constellation (1854)

Until 1858 the USS Constellation performed diplomatic duties in the Mediterranean.

From 1859 – 1861 the Civil War found the Constellation as a flagship of the Africa Squadron, patrolling against slavers. Much of the war, the Constellation, was a deterrent to Confederate cruisers and commerce raiders in the Mediterranean Sea.

In 1865 she returned to Newport and was decommissioned. For the next 75 years, the Constellation was training and receiving ship. In this period she undertook a number of special assignments – Paris Exposition of 1878, Columbian Exposition of 1892, Ireland food aid of 1880 and to Baltimore for the centenary of “The Star-Spangled Banner” in 1914.

The USS Constellation is currently a museum ship at Constellation Dock, Baltimore, Maryland. She was placed on the National Register of Historic Place in October 1966.