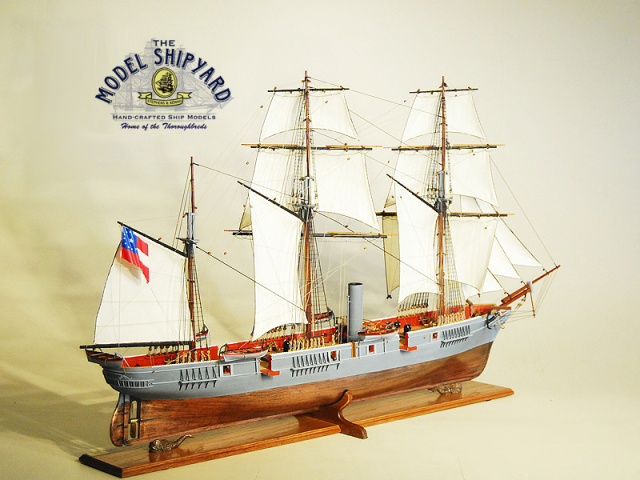 The CSS Alabama was a Confederate Cruiser

About the construction of the CSS Alabama wooden scale Model Ship

History of the CSS Alabama

The CSS Alabama was an Auxiliary Bark built in great secrecy in 1862 by John Laird Sons & Company at Birkenhead.   Commissioned by agent James D Bulloch on behalf of the Confederate Navy.

Her motto was Aide-toi et Dieu t’aidera (French for “God helps those who help themselves”) this was engraved in the bronze of the great double ship’s wheel.

Alabama had a complement of 148 officers and men and an armament of 2 pivot guns and 6 cannons.

Powered by both sails and two 300 horsepower horizontal steam engines, Alabama was the most successful raider in terms of numbers of vessels seized – capturing and burning 55 ships and seizing 10 more.

Ordered as hull no.29; the CSS Alabama was temporary called Enrica, but after she was armed from the supply ships Agrippina and Bahama off the Azores, Captain Semmes commissioned her as CSS Alabama.

Over a period of 2 years the CSS Alabama attacked Union merchant and navy ships and in that period she never once anchored in a Southern Port. In 1863 Alabama entered Table Bay, South Africa and thus, created the folksong, “Daar Kom Die Alibama”

Under command of Captain Semmes, the CSS Alabama sailed into the Indian Ocean as far as Singapore. In 1864 Semmes then returned to Cherbourg in Europe for desperately needed repairs and supplies.   Unfortunately, the Union persuaded the French to impose a 24-hour limit on the stay of Confederate-flag ships in French ports.

The Federal steamer, USS Kearsarge under Captain John A Winslow arrived at Cherbourg from Flushing, Belgium. Semmes who reportedly said, “ I am tired of running from that flaunting rag” opened fire on Kearsarge as soon as they left port.

Alabama was no match for the Kearsarge and started sinking within an hour after the battle begun. The British yacht Deerhound rescued Semmes and 40 others.

While the sinking of Alabama did not affect the outcome of the Civil War, her loss was a blow to Confederate morale. As a result of the devastation caused by her, the CSS Alabama claims came to life.   She alone accounted for as much as $5 million in losses.

In 1984, French divers from the minesweeper Circé discovered the remains of Alabama six miles off Cherbourg.

Learn more about the CSS Alabama