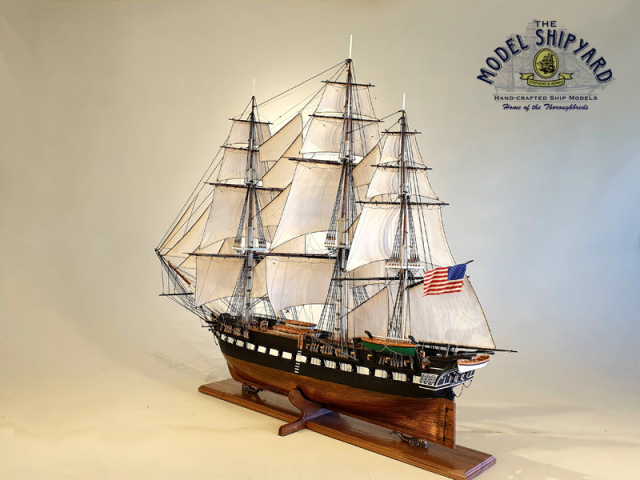 USS Constitution was a three-mast frigate of the United States Navy.

This model ship of the USS Constitution was custom built from the following information:

About the construction of the USS Constitution wooden scale Model Ship

History of the USS Constitution

The USS Constitution is a three-mast frigate of the United States Navy with an armament of 32×24 pounder long guns, 20×32 pounder carronades, and 2×24 pounder bow chasers. She was built by Edmund Hartt in Boston and launched in 1797.

She had a complement of 450 and is the world’s oldest commissioned naval vessel afloat. Built in Boston to defend the young American nation, USS Constitution is nearly as old as the document for which George Washington and Congress named her. Both the document and the ship have proven to be resilient symbols of America’s strength, courage, and liberty.

In 1810, captain Isaac Hull took command of the USS Constitution and she defeated the HMS Guerriere in the War of 1812. It was during this battle that she got her nickname “Old Ironsides” as a result of the cannonballs bouncing off her hull as if her sides were made of iron.

In 1815, when her war service ended, the USS Constitution was laid up for 6 years for extensive repairs. She was rebuilt in 1833, and under the command of “Mad Jack” Percival, she became the first American warship to circumnavigate the globe.

During the Civil War, the USS Constitution was brought to Newport, Rhode Island, to serve as a training ship for Naval Academy midshipmen.

In 1882, she was removed from active service and retired to Portsmouth, New Hampshire Naval Shipyard. She was brought back to Boston in 1897, refitted for display and opened to the public in 1905 where she became a national monument.

From 1931 to 1934, the USS Constitution was re-commissioned for a tour of ninety American cities after which she returned to Boston harbor at Charlestown Navy Yard.

The USS Constitution rests here today as an enduring symbol of the document for which she is named and of America’s determination to defend the republic she so long protected.