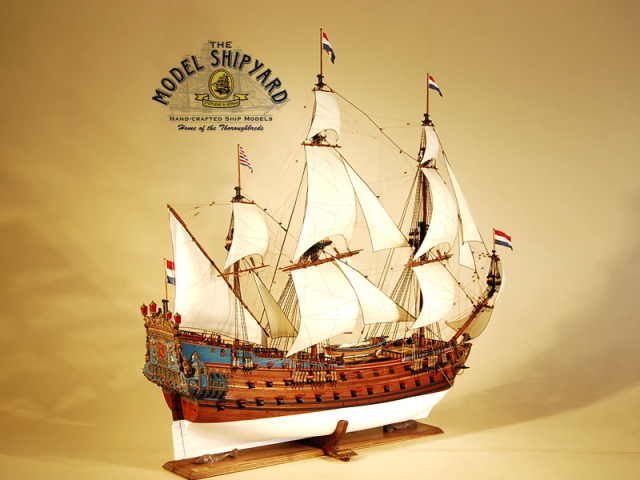 The De Zeven Provinciën was a 86-gun Dutch Flagship built in 1665.

This model ship of the De Zeven Provincien was custom built from the following information:

History of the De Zeven Provinciën

De Zeven Provinciën was a three-masted Dutch ship of the line with an armament of 80 guns. She was built for The Admariliteit van de Maze, Delftshaven in the Netherland by Salomon Jansz van den Tempel and launched in 1664 with a complement of 450.

There was a commercial rivalry between English and Dutch merchants, which led to the Anglo-Dutch war of 1652-54. As a result, the Dutch undertook to build one of the largest vessels, the De Zeven Provinciën. In 1665, Admiral Michiel Adrienszoon de Ruyter was appointed a commander in chief of the De Zeven Provinciën. He led the Dutch fleet for the first time in what became known as” the Four Days Battle.”

In the morning of June 1665, the Dutch arrived off the Downs with about eighty-five ships and were met by an English force of about fifty-six ships under George Monck, Duke of Albemarle. The De Zeven Provinciën’s rigging was shot up and de Ruyter was unable to pursue. The Dutch failure to achieve a victory over the English also prevented them from landing on the English coast. During this Battle, the De Zeven Provinciën was completely dismasted. The Dutch lost twenty ships, 4 000 dead and 3 000 prisoners.

De Zeven Provinciën served in four major battles: The Battle of Solebay, the first and second Battle of Schooneveld and the battle of The Texel.

De Zeven Provinciën’s final naval action came during the War of the League of Augsburg. In 1692, at the battle of La Hogue, De Zeven Provinciën was heavily damaged and returned to Rotterdam. Two years later she was broken up.

As of 2008 a replica of the De Zeven Provinciën is under construction at Lelystad, Netherlands.