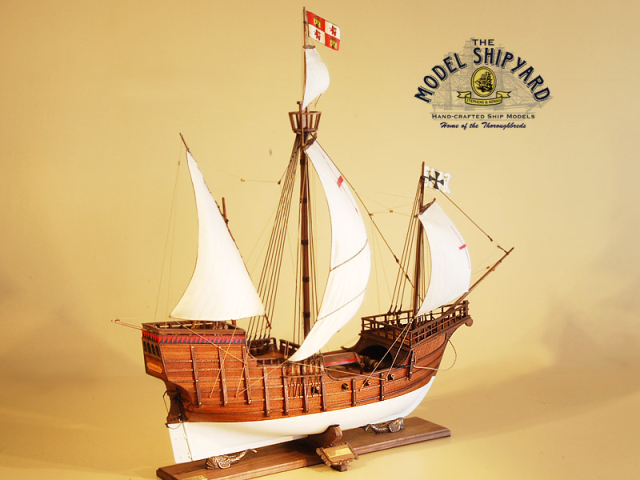 Victoria was a Spanish carrack and the first ship to successfully circumnavigate the world. The Victoria was part of a Spanish expedition commanded by the Portuguese, Ferdinand Magellan, and after his demise during the voyage, by Juan Sebastián Elcano. The expedition began with five ships but the Victoria was the only ship to complete the voyage. Magellan was killed in the Philippines. This ship, along with the four others, was given to Magellan by King Charles I of Spain. Victoria was named after the church of Santa Maria de la Victoria de Triana, where Magellan took an oath of allegiance to Charles V in order to be granted full access to the Spice Islands. The four other ships were Trinidad, San Antonio, Concepcion and Santiago. Trinidad, Magellan’s flagship, Concepcion, and Santiago were wrecked or scuttled; San Antonio deserted the expedition before the Straits of Magellan and returned to Europe on her own. The voyage started with a crew of about 265 men aboard five ships. Of all these, only 18 men returned alive on the Victoria. Many of the men died of malnutrition. Beginning the voyage, Luis De Mendoza was her captain. On April 2, 1520, after establishing a settlement they called Puerto San Julian, a mutiny involving the captains broke out, but it was unsuccessful. Antonio Pigafetta’s and other reports state that Luis de Mendoza was then executed along with Gaspar Quesada, captain of the Concepcion[1]. Juan de Cartagena, captain of San Antonio was marooned on the coast. Duarte Barbosa, who had helped Magellan in facing the riot, then became the captain of Victoria. According to Pigafetta, after Magellan’s death on April 27, 1521, at the Battle of Mactan, remnants of the fleet tried to retrieve Magellan’s body without success. Thereafter, Duarte Barbosa and João Serrão were elected leaders of the expedition. On May 1, 1521 they were invited by rajah Humabon of Cebu to a banquet ashore to receive a gift for the king of Spain. There most were killed or poisoned, including Duarte Barbosa and João Serrão, who was brought by natives who wanted to exchange him for weapons, but was left behind. Pilot João Carvalho, who had survived the trap, become then Victoria’s captain. In August, near Borneo he was deposed and Juan Sebastián Elcano became captain for the remainder of the expedition. The long circumnavigation began in Spain in 1519 and returned early September of 1522 after traveling 42,000 miles, 22,000 miles of which were unknown to the crew. On December 21, 1521, Victoria sailed on alone because the other ships left the convoy due to lack of food and wine(Jerez). During the course of the expedition, the fleet faced several harsh storms. This was evident because upon returning, this ship was in terrible shape, with her sails torn and only kept afloat by continuous pumping out of water. Victoria managed to pull through and return to Spain with a shipload of spices.