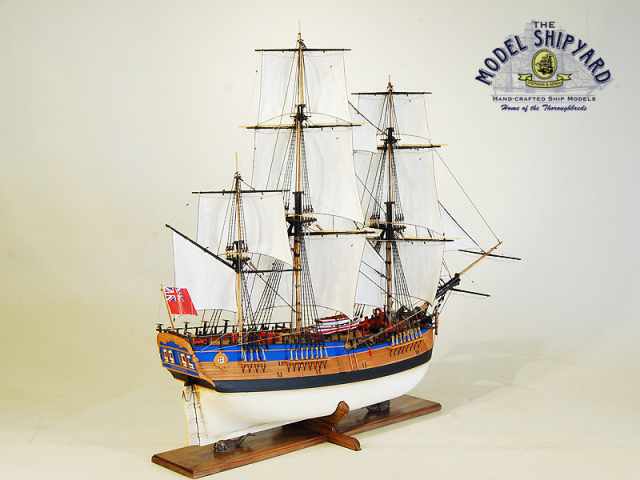 “No sea can hurt her…” (The famous words of Captain James Cook referring to the H.M.S. Endeavour.)

This model ship of the HMS Endeavour was custom built from the following information:

About the construction of the HMS Endeavour wooden scale Model Ship

History of the HMS Endeavour

The HMS Endeavour was a Royal Navy Bark with an armament of 22 and built by Fishburn, Whitby of England. She was launched in 1764 with a complement of 94.

In 1768, under the command of Captain Cook, the Endeavour set sail on an expedition to the South Seas. This voyage had a twofold mission, the first was to visit Tahiti to observe the transit of Venus across the sun, to contribute the improvement of astronomy, on which navigation depended and the second was to determine whether there was a great southern continent.

The Endeavour sailed from Plymouth and called at Madeira, Rio de Janeiro and the Bay of Good Success in Le Maire Strait before arriving at Tahiti.   Cook’s crew had good relations with the Tahitians and remained on the island for three months. They sailed south then west, and landed on the north island of New Zealand on October 1769. The Endeavour established that New Zealand consisted of two main islands, separated by Cook Strait, a name suggested by Banks.

In 1770 Cook sailed west across the Tasman Sea and in April reached New Holland (Australia). The Endeavour entered Botany Bay (just south of modern Sydney), which they named “for the great quantity of New Plants collected there.

On this journey, Cook became the first captain to calculate his longitudinal position with accuracy. He was also the first to reduce scurvy among his crew. He is considered to be one of the greatest explorers in time.

After claiming New Holland for the British Crown, Cook sailed on to Batavia (Now Jakarta) The Endeavour anchored at Cape Town in 1771 and then sailed for St. Helena.

The Endeavour was sold to the navy in 1775 and continued to sail for the next fifteen years.

The Endeavour ran aground in 1793 off Newport, Rhode Island and was later broken up by James Cahoon.