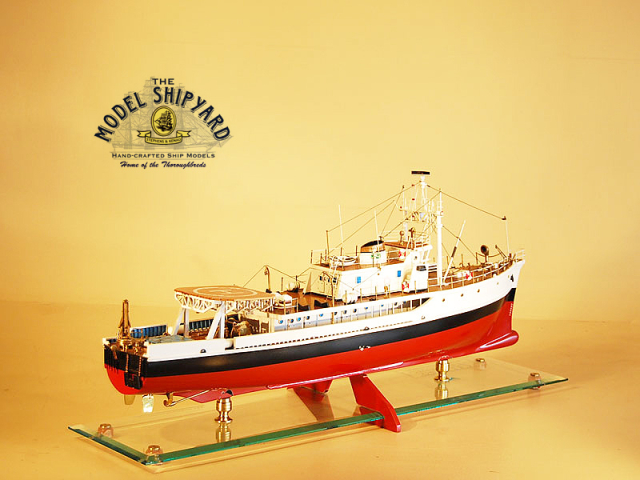 Calypso was a Canadian research vessel.

This model ship of the Calypso was custom built from the following information:

About the construction of the Calypso wooden scale Model Ship

History of the Calypso

Calypso, previously called J-826, was commissioned in 1942 as a minesweeper for World War II. Ballard Marine Railway in Seattle built her. She was launched in 1942 with a complement of 27.

During the Calypso’s time at the British Royal Navy, she operated out of Malta, Taranto, and Naples until the end of the war.

In 1947 the Calypso was reverted to the US Navy and operated as a ferry between Malta and Gozo.

In 1950 the Calypso was bought by former MP, Thomas Loel Guinness and leased to Jacques-Yves Cousteau for 1 franc a year, under two conditions – Cousteau would never ask him for money and that he never reveals Guinness’s identity.   This fact only came to light after Cousteau’s death in 1997.

Calypso proved to be an ideal platform for an expedition vessel and support base for diving, filming and oceanographic research. She carried state-of-the-art equipment, including one- and two-person minisubs, diving saucers and underwater scooters. She was also fitted with a “false nose” – an observation chamber ten feet below the waterline. Her modifications also included scientific equipment and a helicopter pad.

Over 46 years, Calypso logged more than a million miles, chiefly in the Mediterranean, the coast of Africa, North & South America, Oceania, the West Indies and Antarctica.

On 8 January 1996, a barge accidentally rammed Calypso and sank her in the port of Singapore. She was raised on 16 January, pumped dry and put in a shipyard. She was then towed to Marseille, France, where she laid neglected for two years. In 1998 she was towed to the Maritime Museum of La Rochelle for repairs and exhibition.

After 15 years of disputes regarding the Calypso’s restoration and moving her about, she presently resides in the Piriou Shipyard awaiting resolution from the Business Court in Quimper with regards to her restoration.